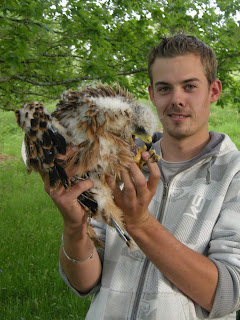 During my ringing career I have been lucky enough to handle several raptors. Barn Owl, Tawny Owl, Long-Eared Owl, Kestrel and Sparrowhawk, but never did I think that I would get the chance to ring a Red Kite. Sunday 5th June was the day that it happened, as I joined Kelvin Jones and Tony Cross in South Wales. What a beautiful bird it was! 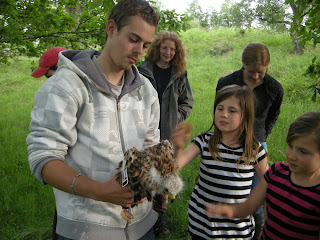 The land in which the Red Kite has decided to nest in, had a large family and so they all came down to watch the Kite get ringed. This picture is just a snap shot of the amount of people that came to watch. A total of 15 people, mainly young kids, observed my activities and asked loads of questions as to how long the ring would last on the bird's leg and other matters such as why do you ring birds.. Future ringers in a few years time? 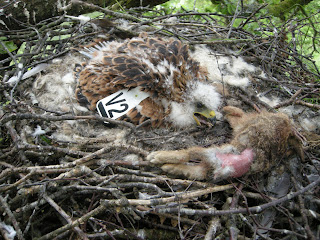 Tony kindly took my camera up to the tree and took a picture of the Kite in the nest, complete with the remains of it's last meal and what looks to be a hare.

Before this all happened, we made a swift visit into the Egret colony where several more Little Egrets were colour ringed as well as 2 Grey Herons. Another new species for me and a bird that is somewhat calm in the hand. 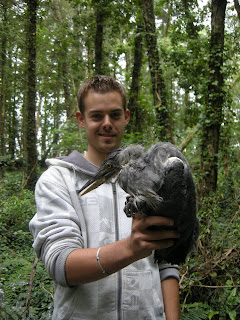 Huge thanks to Tony Cross, Adrienne Stratford and Kelvin Jones for a great day!
Posted by Chris Bridge at 10:15