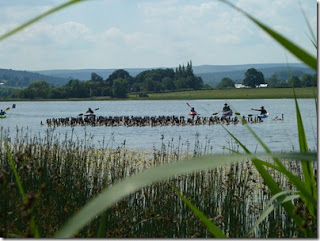 Photographed by Kane Brides
Arriving back from North Wales early morning on Thursday 30th June, there was just enough time to relax before we headed off again down to Llangorse Lake on Sunday 3rd July, down in Powys in South Wales.

Joining up with Gillian Dinsmore on site; along with Kane and Zac, we were greeted by 25 other helpers and ringers. The aim of the morning's catch was to round up all the Canada Geese on the lake as this is the time of year that they undergo their annual moult and so this is the best time to catch as many as possible.

The roundup is carried out by canoeists which corale the birds from the entire lake towards the catching area. (See above photo). 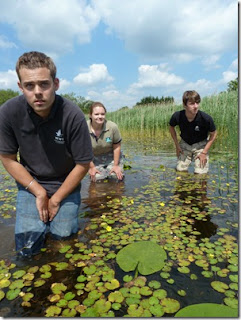 Photographed by Kane Brides
Myself, Gillian and Zac ready for action as the birds moved closer up towards the holding area. Getting wet in order to catch birds is something that were are very familiar with! 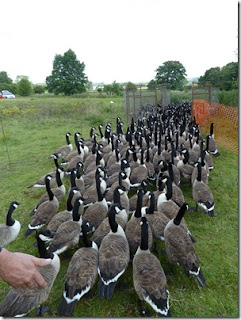 In total, 409 Canada Geese caught during the catch and many new and retrap birds processed. An additional Osprey fishing in the lake during the catch, stunning landscape and weather made for a very memorable catch and hopefully we will be back again next year! 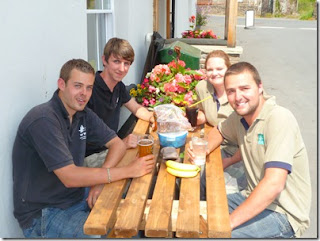 A well deserved pint and some tasty snacks provided by Gillian at the local pub was a great end to a super day!

Huge thanks to Jerry Lewis from the Llangorse Ringing Group for inviting us along.