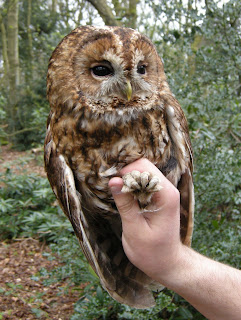 Instead of meeting up with Steve and Rachel for a mist-netting session at Arthur's in Caernarfon on Sunday morning, I opted to say my farewells to Craig. The reason for this is from the end of April until October; Craig will be out in Sweden at Kvismare Bird Observatory to help aid census work until June and then to run a ringing base until October..

This weekend was going to be the last chance to see him before he departs on his travels..although we are intending to visit him over in Sweden at the end of August!

On Friday afternoon I travelled home to spend a few hours with the mother as I wouldn't be there on Mother's day and then hopped on a train to Atherton where I met up with Kane.. Early on Saturday morning we met up with Craig and headed for the Lake District to see what we could catch. Unfortunately, our original plan was to mist-net over the usual river, but it was a bit too high and we weren't that well equipped as I had forgotten my waders. The day ended with no birds caught but good to catch up with Craig before he departs..

Late afternoon on the Saturday, myself and Kane went to his local woods to do some nest box monitoring and managed to catch this female Tawny Owl which was a lovely surprise. This bird was already ringed - GR05861 was ringed by Craig in May 2010, so it was good to see that she had survivied the harsh winter! Having never handled a Tawny Owl before, it was a superb bird in the hand and consequently has won itself the new position of my blog image.. 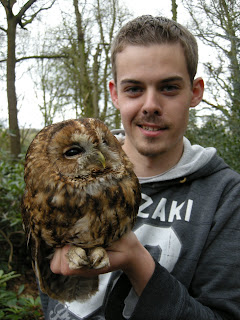 Travelling back to Bangor on the Monday morning, just 1 week left at university before I finish for the easter holidays and before I head south - more on this in due course..
Posted by Chris Bridge at 04:54 4 comments: 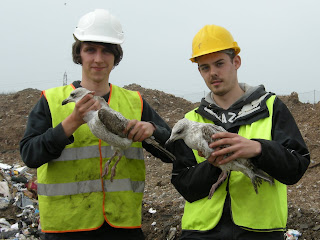 After a hugely successful cannon net catch at Kinmel Bay on Sunday 20th March, myself and Zac were keen to get out again to do some cannon-netting. A full week of lectures out of the way and we were back out again, cannon-netting with Steve and Rachel the following weekend. They had kindly invited myself and Zac to a gull catch down in South Wales with the Severn Estuary Gull Group and seeing as though I had wanted to take part in cannon-netting large gulls on a rubbish tip for quite some time, I had never had the chance until now.

Travelling down via train, we met up with Kane at Newton-Le-Willows station, on Friday 26th March. A short drive back to Atherton and a quick stop at the local chippy; we were ready for bed as it was going to be an early start in the morning.

Setting off around 4am and a few hours later, we reached our service station in time for some brekkie and a cup of coffee.. Shortly after we met up with Steve and Rachel and headed off down to the rubbish tip. Kane then headed off to his conference and to give his talk at WWT Slimbridge. 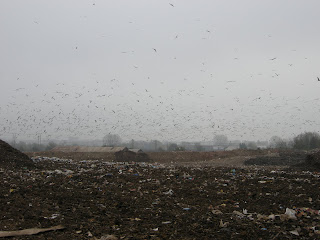 On arrival at the rubbish tip, we slipped on our hi-viz jackets and hard hats and made our way onto the tip to set the cannon-net. This was a new experience for me as the net was set on a large piece of plastic. Shortly after, we were all set and it was clear that there were plenty of large gulls in the area, so hopefully we would catch a good sample of these later on. An hour or so passed and eventually the gulls came into the catching area and the net was fired, catching 138 birds. 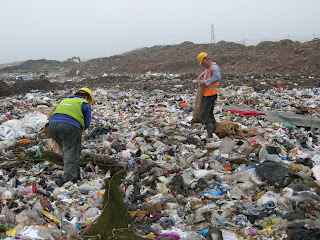 Throughout the catch, once the smell of rotting rubbish and all other manner of smells had worn off, it wasn't too bad.. Ringing and processing was extremely interesting due to the fact that when your sitting down on your knees, at times, the feeling in my feet was non-existent so getting up proved rather interesting! The birds were carefully extracted from the net and placed in sacks which were securely tied and placed in a safe area ready to be dealt with.. 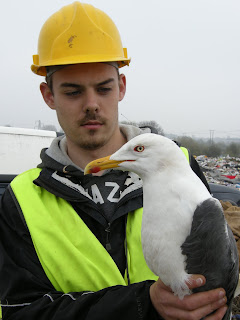 Managing to ring around 45 large gulls during the morning, was excellent practise for myself to perfect using F, G and H rings - a key criteria for when I recieve my C Permit which will hopefully be sometime in the next 8 months..

Once the catch had finished, we headed off to WWT Slimbridge, with Gillian Dinsmore who kindly dropped us off here.. In the car-park we were greeted by chittering Sand Martins and a single Swallow. A thorough check around the collection areas and a few hides for any colour-ringed Coots revealed no birds so we met up with Kane and Laura Dalton..

WWT Slimbridge has recently built a canoe trail so having some free time on our hands, we opted for an hour off and pootled around the trail - thankfully knowone fell in, although a woman before us had in the last hour had a capsize... Poor woman - she was soaked through! 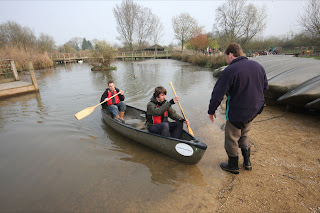 An hour's worth of canoeing and there was no better way to end a brilliant day by sitting ourselves down in the local pub, enjoying a few pints of the local cider and a few portions of cheesy chips..
Arriving back in Atherton late evening, we grabbed some food and hit the sack as we were somewhat shattered after a long day!

Huge thanks to Steve and Rachel for inviting us along to the catch and for a mega day's canon-netting, to Kane for transporting us to and from sites, to Gillian Dinsmore for giving us a lift to WWT Slimbridge and to John Saunders for all his hard work throughout the catch..

Posted by Chris Bridge at 03:31 No comments: