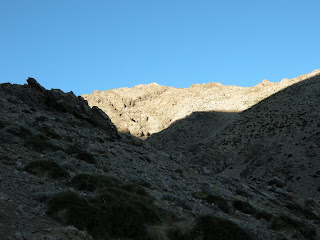 Next morning we were up at 5:30am for an early dawn walk up into the High Atlas Mountains. Packing up our gear early on and grabbing a quick moroccan coffee, a few slices of bread and honey, it was all we needed to keep us going for the day. Leaving the french hostel we headed on up the valley; parking the car at the bottom of the valley. Several hours were spent stopping and starting picking up various birds along the way.. 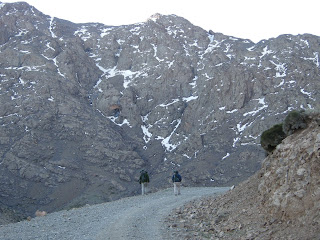 Our targets here were the atlas specialities, which soon followed one by one. Atlas Shore Lark were numerous whilst Seebohm's Wheatear were even more numerous. A Male Spectacled Warbler burst into song infront of us; a bird we weren't expecting to get to grips with until later on in the trip but a very welcome bird all the same. 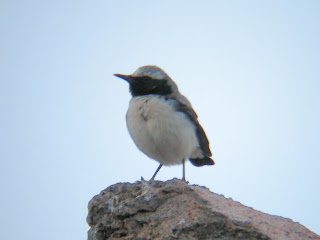 Plenty of Red-Billed and Alpine Chough fed on the lower slopes, but I had to save the best bird until last and this wasn't until we were heading back down the valley when a couple of Crimson -Winged Finch flew past and landed nearby! Cracking little birds and our main target for this visit. Rock Sparrows and a couple of unexpected Dippers were seen on our way down alongside the river.

Successfully getting to grips with all our target species here, we headed on down from the High Atlas Mountains and headed in the direction of Boumalne Dades, stopping en-route at the Tizi-n-Tichka pass. Stopping for a pair of Rollers on nearby wires was well worth it as this has to be the best view of Roller I have ever had. 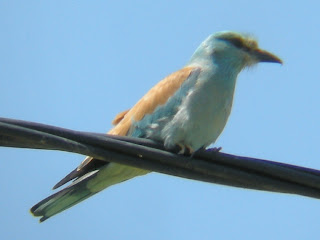 We were now in the deserts and after several failed attempts we managed to locate the 'Le Soleil Bleu' Hotel - our destination for the night. An exceptionally delicious meal was enjoyed by all and with Soup, Tajin, followed by orange slices dipped in Cinnamon and 3 beers - it was time to get our heads down for the night.

Posted by Chris Bridge at 02:36 No comments: 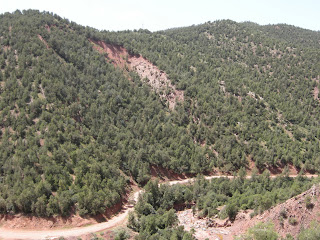 Leaving Ormskirk at 3:45am with Ralph and Eugene, we headed off to Manchester Airport and with only a few delays on the way there, we were more than ready for a sleep on the plane. A calm and relaxing flight awaited us, followed by a short discussion about what the first bird was to be when we landed in Morocco. Collecting the hire car took a while but a good and roadworthy car for the terrain we intended to take it on. Most interestingly, the first bird we encountered was infact House Bunting inside the actual airport around the car hire desk!!

Dumping our gear in the car, we headed out of Marrakech following a guy on a scooter who was going to show us the way out of the area and fair play to him, he did actually take us to the correct road. The plan was to head for Oukaimeden for some High Atlas Mountain birding for the day.

Driving towards Oukaimeden we stopped en-route every 10-15 minutes as birds seemed to be everywhere and we were keen to see everything! 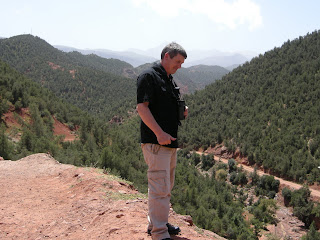 During the drive to our first main site of the trip we encountered some superb birds such as our first Barbary Partridge, Little Swift, Moussier's Redstart, Western Olivaceous warbler, African Blue Tit, Common Bulbul and African Chaffinch of the trip.. Eugene was keen to have a look over the edge of the cliff, but we were to see worse heights than this along the way. A grand total of 48 species for the day and 8 lifers.

Driving higher and higher into the Atlas mountains until we could drive no further, we spent the night in a french hostel with a lovely meal and well earned beer. A quick shower and we hit the sack for an early morning walk high into the Atlas Mountains.

Posted by Chris Bridge at 01:58 No comments: