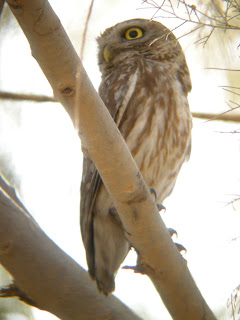 Having never experienced sleeping in a car in the middle of the Saharan Desert - it was something I won't be doing anytime soon. After a awful night's sleep, waking up all groggy and shattered, it was time to get out birding; this being 4am. I had been awake at 3am listening to an Egyptian Nightjar churring which was later followed by great views of a bird flying around our car just before we set off for our dawn walk - great stuff!

A flock of around 200 Bee-eaters flushed from their overnight roost above us! A Rufous Bush Robin gave great views as did 1 Male Golden Oriole and a small group of Fulvous Babbler, in nearby vegetation. We were witnessing migration at first hand! 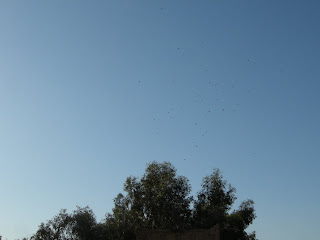 Around 6am we bumped into a tour group who kindly gave us a phone number to contact for some 'proper local' bird knowledge. 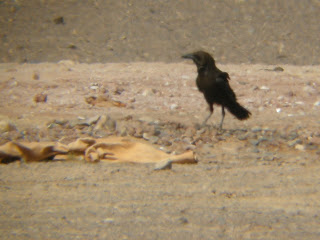 Another target bird for us here was Brown - Necked Raven. These were very numerous in the correct habitat and are very different from our British species.

Next stop was the 'Hotel Said' for African Desert Warbler. After a good hour of searching, a bird popped up right by our feet and flew to a nearby conifer. Great views were had of this little beauty! 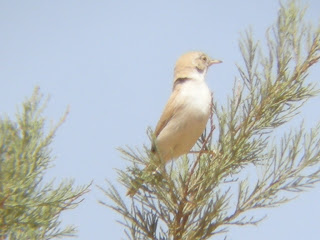 Moving onto the 'Auberge Caravanne' where we had a cup of mint tea and eventually located the only pair of Desert Sparrow in the area at 'Cafe Yasmina'. However, instead of nesting in the old sheep huts like previous years, this year they turned their attention to a nearby nestbox. 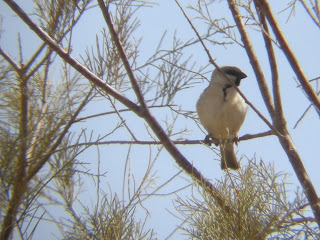 Throughout the rest of the day, temperatures began to soar to an all too hot - 38 degrees so we retired inside and had a refreshing glass of coke. The decision was made to stay another night in the 'Auberge Derkahaoua'. 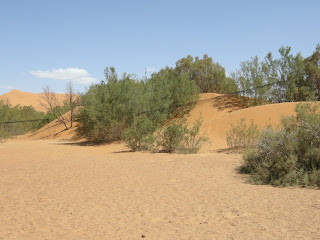 Spanish ringers were also in the vicinity but unfortunately when we arrived it was mid day and the nets were furled. A real shame as I would have loved to see what they were catching.

Other specialities seen during the day include Saharan Olivaceous Warbler.
Posted by Chris Bridge at 08:55