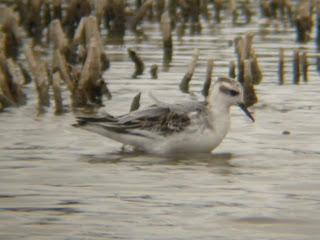 Time doesn't half fly when your having fun, as they say! After meeting up with Kane and Ciaran to attempt to catch Meadow Pipits on their migration on Thursday. Early on Friday morning, it was once again, time to pack up my gear and move back into Bangor university, up until christmas anyway. Leaving on time was the best thing we could have done!

Today was Mrs Bridge's birthday, so a trip to North wales was the call of the day. Dropping me off at Bangor was next on the agenda. A quick lunch stop at Llanfairfechan where the waves were piling in, some almost 10ft high! No Leach's Petrels unfortunately! 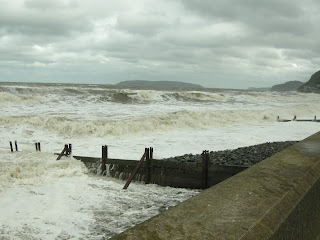 A quick glance at my phone and a text off Alan Davies awaited. Hmmm...
'Grey Phal at Conwy RSPB from Benarth hide and showing well'

Holy ****!! A quick dash to Bangor, dumped my gear in my room, waved farewell to the parents and hopped on the next available train to Llandudno Junction. An hour later and the bird was still there and I was at that point, sprinting the short journey to where the bird was. Rather greatfully, Alex was keeping tabs on the bird and on arrival in Benarth hide; this is what awaited me! 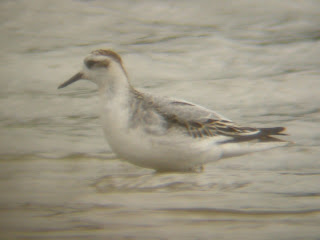 Grey Phalarope under my belt! A fantastic looking bird and a great yeartick! Certainly one bird which I had hoped to connect with this year.. Presumed to be moulting from a Juvenile into a 1st-winter bird. Also seen included - Little stint and Greenshank.

Throughout the hour I was there, the phalarope was constantly being harrassed by a Greenshank and was rather flighty at times, dissapearing to more distant islands as to where it was originally showing from. Great views were had from about 30ft or so infront of Benarth Hide! 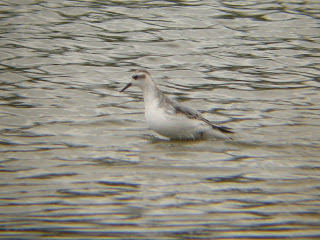 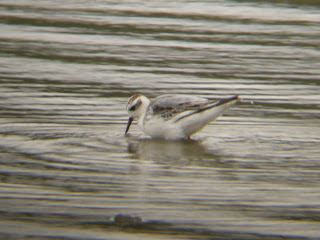 At times the bird was showing on the water and on land as well, which I hadn't seen before. A Grey Phalarope on land and not making people dizzy; as is usually the case.. 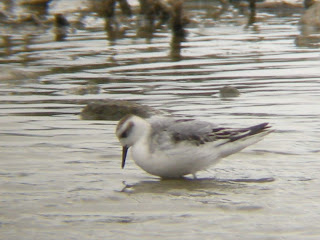