In Britain at the moment...

I am currently trying to control the emotions running through my head at the moment! Northern Parula for a start, is my no.1 bird to see in Britain, the flycatcher species would just be idyllic to see, the warbler isn't annoying me too much as they seem to be quite regular these days and White's Thrush is no.3 on my top 5 birds to see in Britain.

After much heart-ache, they have been put aside for now and today has been a relaxed and non-stressful day for once.

So.... Early this morning, I was up at first light around 7am to check if the Alder, Willow or Yellow-Bellied flycatcher was still present at Blakeney point in Norfolk. This morning, it was rather shocking to see that it was still there after being reported last night, as 'no sign'! The familiar heart-ache soon hit home, realising that I could have seen this bird today. Now presumed to be a Alder/Willow flycatcher and still present in the plantation at Blakeney point/Norfolk; as I write this post! Today I could have seen Alder/Willow flycatcher, a Bonelli's warbler species and a Radde's warbler all in Norfolk. Sadly, I have been stuck in Bangor all day, getting various jobs done that I have been wanting to finish for a long while! I suppose an opportunity may arise sometime this week for me to twitch it, but we will have to wait and see what the bird decides to do.

Mid-afternoon and it was time for a break, so a short 4 mile along the North Wales coast for a few hours did the job. Having missed high tide, the waders were all distant and nothing much else was about. Although a flock of 25 Greenfinch moved north overhead and headed out over to Puffin island - interesting.

Worst of all was finding a dead Razorbill on the beach at Porth Penrhyn, which looked rather fresh I have to say and more than likely got blown in with these strong winds over the weekend. 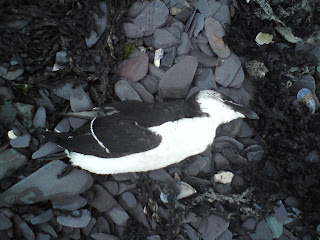