After having a serious dip up in Derbyshire yesterday, I decided for a more gentle approach in the form of 2 yearticks that had been seen at seaforth the day I was in Derbyshire. Little Stint and Roseate tern were yet to appear on my yearlist for 2010, so a brief 2 hours at Seaforth LWT would hopefully achieve this. A short 40 mintue train journey and I was peering through the fence at Crosby Marina scanning for these 2 birds.

I knew the Little Stint had been seen on the causeway infront hide A, which can be viewed from the fence at Crosby and the Roseate tern I had absolutely no idea where that was. So after a few scans here and there of every available piece of land in my field of view, it was clear that neither birds were present!
The only birds present this morning were a flock of Dunlin, Lapwing, 1 Black-tailed gowit, 1 Ringed plover, several Little Grebes and a singing Chiffchaff in the scrub by the 1st car-park at Crosby marina.
A scan over the sea and tide edge added.. absolutely bugger all to be truthful. It got to a point where I had had enough and hopped back on the train, to find that a little stint had been seen at Hesketh Out Marsh the same morning! This Little stint wasn't seen the next day either, which had me well and truely pissed off! 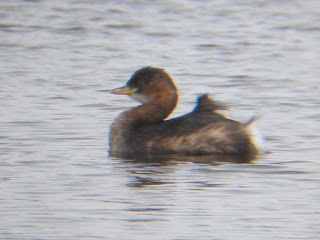 In the evening I met up with Kane Brides and Stephen Christmas to help out with their Swallow roost site. A total of 55 birds were caught which included 52 Swallows, 3 Sand martin and 1 Reed warbler. Next morning myself and Kane did some more ringing and caught a Dunnock in his garden and a few Coot at various sites around Manchester as part of his colour-ringing Coot project. Thanks Kane for a rather successfull few days ringing!