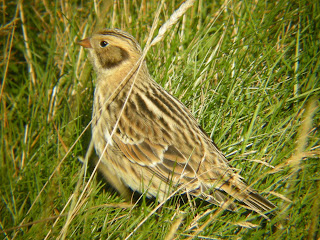 Since seeing my first Lapland Bunting back in May 2005 at Crosby Marina, was something really special. After a dash from Ormskirk to Crosby with Mr M Bridge, the bird showed well upto 5ft at times, but soon, the forecasted thunderstorm hit, the bird flew off high and we got soaked through to the skin. At that time I owned no camera, that was never to be the case again! I have never seen one since up until today!

Trying to reach my target of 280 species for 2010, is going extremely well so far! In the last 2 weeks I have seen:- Whiskered Tern, Red-Necked Phalarope, Sharp-Tailed Sandpiper, Little Stint, Grey Phalarope and lastly Lapland Bunting.

Waiting patiently until Saturday, it was time to go and search for the 7 Lapland Buntings on the Great Orme in Llandudno. Having arranged to meet Zac Hinchcliffe at Bangor station at 5:45am this morning, it was soon clear that he had overslept! Oh well, maybe catch up with him later. Arriving in Llandudno at 7am, a short walk along the toll road which runs around the west side of the orme and I was on top, scanning the limestone pavements for these charismatic winter finches! Meeting Marc Buzzard was worth while as he had text me on the way up, that he had already had 1 Lapland on a nearby hill. In hot pursuit of this particular bird, it didn't take long for us to pick it up again, running along the tracks like a little mouse. It then decided to fly off and we lost it from view.

Quickly bought Rob Sandham's Nikon Coolpix P5100 camera for a respectable price, as a back-up in case the one I have packs in, just before they departed for brekkie.

Soon after, I relocated another individual further down on the pavements, still running around the paths like a little mouse. However, for 5 seconds only it perched on a rock before flying off again! 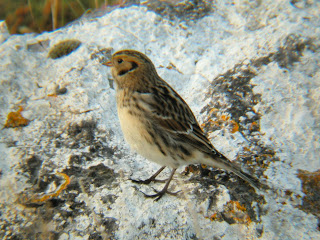 Quickly relocating it, all birders had dissapeared and I had it to myself. It duly took flight again and in searching for the bird, I flushed another 3 Lapland Buntings from nearby, later getting exceptional views of them. I was soon joined by Zac, who had finally arose from his pit. Picking up the birds in flight shortly after, led us to an extremely confiding individual, that stood bold and brass on a grassy clump for about 5 minutes, 5ft from us; enabling mega views and great digiscoping opportunities! 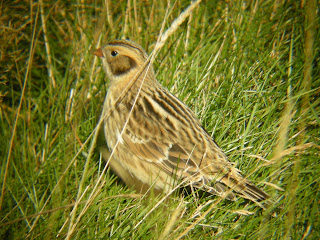 Leaving them to it, we hit Conwy RSPB for the Grey Phalarope and we managed to see it, but rather distantly this time.. Time to call it a day I think as our feet and backs were starting to ache!

A lifer for Zac and a yeartick for me, a great day for North Wales Birding!! To see more on our trip today, take a look at Zac's blog @ http://zacswildlifeblog.blogspot.com 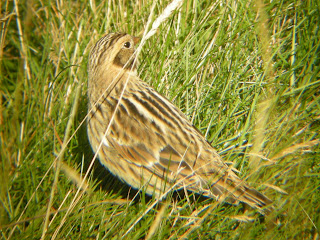 News has just reached me of a Yellow-Bellied Flycatcher at Blakeney point in Norfolk! A 1st for Britain so who knows what lies ahead for me in the next few hours? Cheers for now..
Posted by Chris Bridge at 09:25