Seawatching anywhere in the United kingdom can be either, rewarding or damn right dissapointing, today was one of those days when the birds just didn't want to pass by..

On Wednesday 15th September, we visited the beautiful coastal headland of the Isle of Whithorn. I was hoping for another good seawatch and maybe a Leach's petrel but to no avail. Actually, I didn't see one good bird during that seawatch except 1 Manx Shearwater - then the rain dropped it's load. I was also on the look out for Leach's Petrel, but after scrambling around on some rocks, my back foot slipped and I fell head first into an incoming wave and straight onto some sharp rocks. I currently have a large hole in my left shin but is healing quite nicely now. Several bruises are slowing coming through. Hurt like a ******* at the time.. 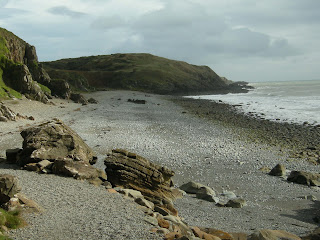 A rather interesting visit to St.Ninians cave was well worth while. After a large gull appeared over the crags, it soon loomed on me that this was no gull and everyone on the beach turned around abruptly - poor soles. The words that lept out of my mouth were - OSPREY!!!! This was the latest Osprey that I had seen in Britain .. With only a Nikon coolpix P5100, it is not the best camera for taking distant flight shots, but believe it or not this is an Osprey.. 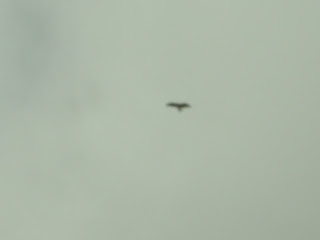 Over the wooded area a Hobby shot through after the last remaining Swallows.
Singles of Peregrine and Sparrowhawk, a few Kestrels and Buzzards drifted over making a total of 6 species of raptor over this small beach, all in less than an hour! Great birding! Another surprise was that of House martins nesting just above the entrance to the cave. Amazingly, the adults were still feeding young! Best shown with video footage I think..

The walk to the beach was rather interesting. Scrub covered the hillsides and the only birds that moved were a couple of Willow warblers and chiffchaffs, a single Blackcap. With the right conditions and this little valley could be alive with migrants. Certainly a worth while site to patch if I ever move up north..

My evening was spent at the badger set - no badgers but my first Pink-feet of the winter cackled overhead and hopefully on their way to Martin mere..
Posted by Chris Bridge at 10:43