Yearlisting this year as been extremely hard work and if I am to make my new realisitc target of 280 species for 2010, birds that turn up in the north-west need to be twitched in order for this target to be reached. So after twitching the Whiskered Tern yesterday with Alex, I was soon looking for my next species..

On Monday 20th September, I set off from Bangor around 5am as I had already planned on going home that day, a few hours and 7 different trains later, I saw myself at Fairhaven Lake in the Fylde cautiously scanning the lake for the Juvenile Red-Necked Phalarope that had been present here for the last few days. It soon became apparent that the bird was in fact swimming around the 2nd island and not the 1st island, in which I was looking at.. 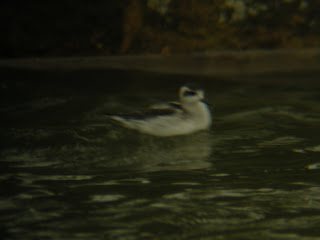 I do have to apologise for the shocking digiscoped picture, but the wind was blowing and trying to minimise the shake on the scope was unbelievable tricky. Anyway, that was one more bird to add to my yearlist and 242 for the year! Realising that I had now drawn with my 2009's yearlist total and it was only September 20th! Last year I finished on 242 and that was right up until December 31st!

What is going to be the next one I wonder?

For better pictures of the Red-Necked Phalarope, see Zac Hinchcliffe's blog @ http://zacswildlifeblog.blogspot.com Cheers for now!
Posted by Chris Bridge at 04:02