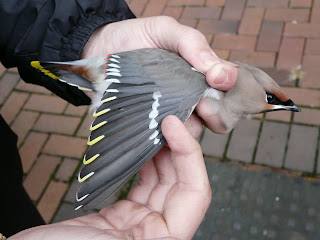 There is just no rest for us young'uns!! More or less half an hour after finishing the weekend's cannon-netting with Scan. Mr Hinchcliffe rang me up to say that he had just had 40 Waxwings past his window on Ffriddoed site!! ??? This guy has some serious luck on his side I can tell you that!

So....before Craig and Kane headed for home for Blackpool and Manchester, I told them the news and seeing as though they both hadn't seen Waxwings for quite some time, we had a drive around lower Bangor and to my ultimate surprise, we picked them out feeding down by the swiming pool near Bangor harbour..

Immediately rang Kelvin Jones from Porthmadog and he was shortly on site with us, complete with mist nets, poles and guys.. Quickly setting up 2 mist-nets down by the swimming pool, we were rather lucky as we managed to catch just a single Waxwing!! Kelvin had 1st dibs as he had wanted to ring one of these species for quite sometime.. You little beauty!! 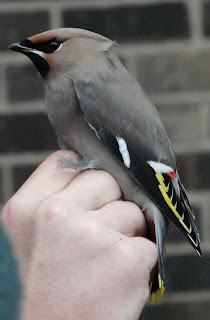 We only managed to catch the one bird on Sunday 7th November, despite much effort. Hopefully we would try again sometime during the week? Kane and Craig then departed for home after a hugely successfull weekend's ringing!

The opportunity arose the next day, as I had the whole day off so I went down to where the Waxwings were the day before, sure enough...they were still here feeding rapidly! Kelvin arrived around 11am, nets set in slightly different positions this time, resulting in 2 birds being caught and ringed. This time, I was able to ring one myself!! I have to say, they are the best birds I have ever been lucky enough to ring!! Amazingly, I was able to flick net the 2nd bird of the morning. Do excuse the expression on my face, but come on.. 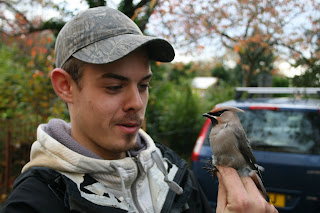 Throughout the week, the flock varied in numbers, ranging from 20 birds to a rather impressive flock of 83 birds! 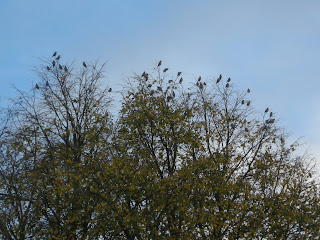 I am really hoping that these birds stick around for a little longer so we can have another opportunity to catch some more!! I will keep you posted!

Almost forgot to mention a Polish-ringed Black-headed gull that myself, Kane and Craig managed to read after we had finished at Scan on the Saturday afternoon.. I will update later on during the week on details of where the birds was ringed. 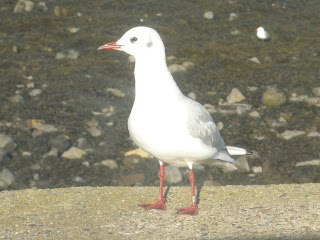