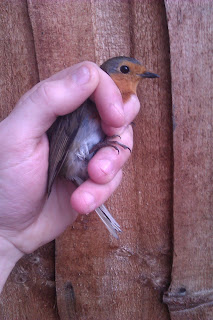 In October 2011, (21st October to be exact), I ringed my first bird with my C Permit. A 3F Great tit was the culprit, caught in my Chardonneret trap on our bird table that Matt and I constructed. From that day my ringing career began as a lone C Permit ringer and it has been a great 3 months so far.
I consider all my birds to have been caught in traps, e.g. Potter, Chardonneret, Spring and Drop trap, as well as hand catching and lamping. No Mist nets have been used as I am yet unable to use these with my permit. 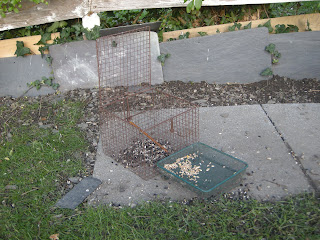 In this time (21st October 2011 - 24th January 2012), I have managed to catch 14 different species which have all been satisfying to catch as I have had to adapt my ways and techniques to try and target individual species. Goldfinch for example; catching 1 bird last year I have already caught 4 birds this year which was due to the position of the trap and choice of food.
Yesterday I spring trapped my 150th bird, a retrap Robin (Y337980) on a meal worm. Realising that I had reached this target I thought I would share with you my totals so far..
C PERMIT RINGING TOTALS
Blue Tit - 86 (3)
Great Tit - 11 (2)
Robin - 10 (5)
Coal Tit - 8 (2)
Dunnock - 5
Goldfinch - 5
Greenfinch - 3
Little Grebe - 2
Blackbird - 2
Long-Tailed Tit - 2
Collard Dove - 1
Wren - 1
Nuthatch - 1
Black-headed Gull - 1
I would also like to say a massive thank you to Matt in Bangor, Rob Sandham in Conwy and Alex Jones in St.Asaph for allowing me to ring in their gardens. A huge thank you also to Tony Cross for the Little Grebe experience.
I will hopefully be out lamping with my new torch tomorrow night (if it arrives) so will update on my catch soon after..
I am hoping my 200th bird will be something special and an extra special blog post is needed for that!
Posted by Chris Bridge at 12:57