I knew this summer was going to be a busy one but not this busy! After a week's worth of cannon-netting down at the wash and 2 days rest, I hopped on the train to Bangor for an evening Swallow roost with Steve and Rachel, followed by a CES visit the next morning... A few weeks ago, they netted the Swallow roost and with 150 or so birds in the roost one night, a smithering of 12 birds was caught.. Several weeks on and the roost had grown considerably! 3 60'ft nets were quickly erected and once this was done, we could sit back and enjoy the show. At dusk, 500+ Swallows had gathered and without any kind of clue, one after the other they piled into the roost site in small flocks. 10 minutes later and only a few Swallows were flitting about - time to extract and see what we had got!
210+ Swallows awaited us in the 3 nets - great extraction practise!
The birds were taken back to the house as usual to be ringed and processed and then roosted overnight and released the next morning - my job.. 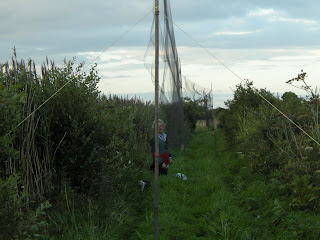 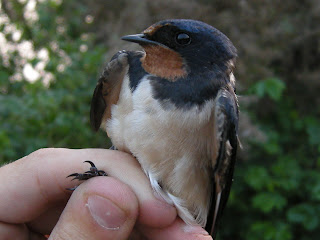 Also, about half a dozen Starlings were mist-netted during the start of the roost and believe me, they are terrible to extract..
The morning after, {19th august} it was up at silly o'clock - being 4am and off for a morning's CES session. The Swallows were all released while Steve and Rachel went and set the 10 nets which are dotted around the site.Now, their last CES visit produced a massive 230 birds in one morning, that was on 12th August! We had hoped that things might have calmed down a bit by now... Don't be silly, had they hell!!
During the morning we caught 215 birds and about 95% of them were warblers. Willow warbler, Chiffchaff, Garden warbler, Blackcap, Whitethroat, Lesser whitethroat, Reed warbler and Sedge warbler were all caught and ringed! If I remember rightly, we had singles of Blackbird, Song thrush, Blue tit, Great tit, Magpie and Starling!
In less than 24 hours we had mist-netted 415+ birds!
Every time I go out ringing now, with whoever it may be, recording what I ring is quite important and in this case I personally ringed about 70 Swallows and 70 warblers.. These records are for when I am ready for my C Permit Application.. 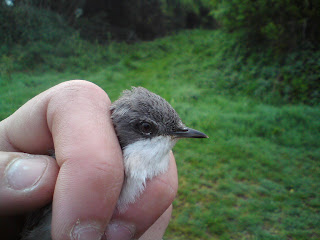 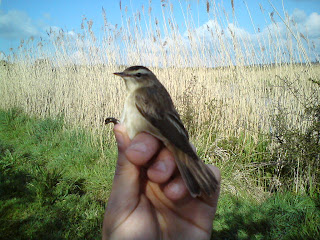 After finishing around 11am, it was time to hop back on the train and begin the revision for my 2 re-sit exams back at Bangor univeristy.. Wish me luck...
Posted by Chris Bridge at 07:53