As most of you will have read, a few days ago, I mentioned about a colour-ringed Pied wagtail that I read at Abergele and Pensarn in North wales.. I also said that I would let you know if I found out where it was ringed - well I did..
I went back to Abergele and Pensarn yesterday in search of the Surf scoters but as usual still not seen them, yet!! Although 2 drake Long-tailed ducks and 18 Velvet scoters were nice!!
Anyway, I relocated the colour-ringed Pied wagtail as soon as arrived and took some pictures and you will be glad to know that they are tonnes better and the area where the bird was ringed has been confirmed..
The bird was ringed as a juvenile/1st winter male - {5} in ringing terms, on 14th November 2008 at Slapton ley in Devon!!!! What a fantastic movement for such a small bird.. A distance of over 300 miles!! Tomorrow I shall attach a map showing the distance this bird has travelled.. So check back again tomorrow and all will be revealed... Cheers 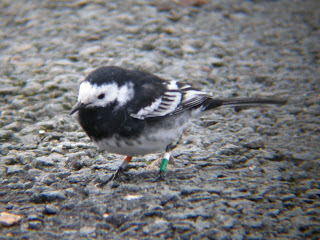 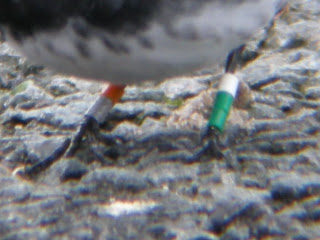 Many thanks to Dennis Elphick, Iain Livingstone and Kane brides for their help with this matter..
Posted by Chris Bridge at 14:45