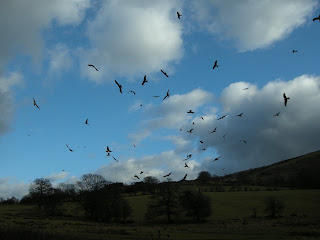 I presume many of you know that there has been a juvenile Black Kite at Gigrin Farm in Powys for over 2 months now. This bird was once thought to be a juvenile Black-Eared Kite, but it was later confirmed to be a Black kite.

Anyway, as I needed Black Kite for my British list and it would make a great yeartick, I decided I would have an adventure and twitch the bird by train and taxi. Unbelievable I know, but if you ask me why I twitch birds or travel for 6 hours on a train just to see one bird in particular - I have no answer for you. 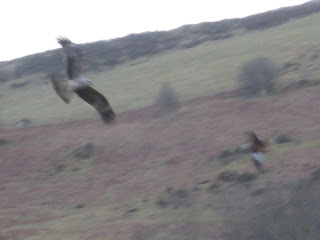 Bird in the top left hand corner is the Black Kite.
On the evening of Tuesday 9th January, I set about planning my route to Gigrin Farm. Train times etc and walking distances. After an hour or so, my plan for tomorrow was complete.

I was up at 5am and made sure I had some food inside me. I then went on to catch the 6:02am train from Bangor and got off at Shrewsbury at 8:09am. I then caught another train at 9:05am and got off at Llandrindod Wells in Powys at 10:33am. I bet your thinking I am mad aren't you? Having arrived at the closest location possible to the kite. I sat down in the train station and thought now what?! As it was only 10:30am and the bird shows at 2:00pm in the afternoon, what the hell am I going to do for 3 hours. 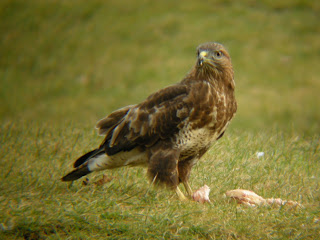 Having spoken to the chaps in the ticket office, they told me the direction in which I should walk towards Gigrin Farm. It was 11 miles and up hill quite alot. I was at first going to walk it but then thought otherwise. I ended up getting a taxi to Gigrin Farm arriving there at about 11:45am. On arrival it was absolutely f****** freezing and that I can tell you for definete! Proceeded up the hill to the farm and met this little old woman hanging out her washing - it turns out I had to pay her £4 to get in and view the kites. Well worth it if you ask me. The time now was 12:20 and I decided to have a walk around the woodland trail that they had set up for the visiting public. I have to be honest, it is nothing special and the only birds I saw on the walk were: Buzzard, Raven, Carrion Crow, Jackdaw, Rook, Treecreeper and not a single bluddy Red Kite! I had to say to myself, am I in the right place here? No Red kites?!

The time flew by and next thing I knew it was 1:30pm so I headed back on down the trail to be met by a car-park full of birders and photographers and a few screaming little kids. It then started to snow! Great! Will I get home again?

These folk that have set up this Red Kite feeding station put locally produced meat in a field where excellent viewing can be had. I set about getting myself set up on top of the hill in the fresh air and nothing to protect me from the biting wind or freezing weather. 6 layers on, a microfleece, vest, hoodie as thick as a sheep's wool, a coat, hat and gloves and then the overtrousers went on and I was toastie and warm, oh and the buff too. Tractor came down the track from behind me and entered the field below. Flung out the meat and within seconds, he had gone and the Kites had just started to swoop down and grab the meat with their talons and not one kite landed on the ground!
A total of 30 Buzzards, 6 Ravens, 50+ each of Carrion Crow and Rook with the odd Jackdaw and a flock of Pied Wagtails frequented the meat, unusual I know!! Anyway, back to the kites... There must have been at least 200+ Red Kites spread around this field and every where you looked there was a kite. I then had another scan through my bins at the feeding frenzie that was unfolding beneath me and a bird flew through my field of view and it wasn't right. I quickly found it again and low and behold, it was the BLACK KITE! Whoooooo! Mega! I watched this bird for about 20 mintues as it flew with the Red Kites and several times, coming down to feed but unfortunately the bird dissapeared and wasn't seen again for another hour and a half! Where the heck did it go? The chap who fed the kites with his tractor came over to me and said: ''Did you see the kite'' Oh yes was the reply. I was the only person sat on these chairs exposed to the elements and so I asked him: ''Do you have to pay to get in the hides?'' and he said no! I had sat out in the cold weather for over 2 hours now, freezing my arse off when I could have been sat in a nice warm hide, bluddy typical!

As you can guess, I vacated quite quickly to the hide and warmed up, but not by much as the hide was quite cold! The views from inside the hide were fantastic! Next minute I hear: ''Kites back''! and in it flew and stayed for another 25 minutes enabling me to get some extremely poor record shots! You can laugh at them later. 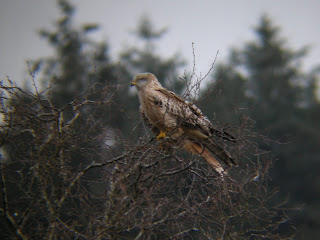 Having had crippling views of the Red Kites and Black Kite. I called it a day and tried to scrounge a lift off someone to very kindly give me a lift back to Llandrindod Wells. No joy and infact, I said to someone: ''I have a 11 mile walk ahead of me'' He said: ''Oh well, what a shame, it will warm you up'' I tell you, I felt like sending the guy to meet the floorboards beneath him but unfortunately this never happened. I just said thanks alot pal and walked out!

Anyway, I phoned a taxi and got back to Llandrindod Wells at about 5:00pm to find the next train back to Shrewsbury to be at 8:40pm! Argh! I could have sworn there was a train at 6pm something! Found a pub, chatted to the locals, had a few pints of guiness, scampi and chips and caught the train from Llandrindod Wells, arriving at Shrewsbury at 10:08pm. Then a train from Shrewsbury at 23:01pm and arrived at Crewe at 23:40pm! Left Crewe at 23:59pm and arrived in Bangor at exactly 2am! Short walk up 3 hills saw me zonked out on my bed at 2:30am and all I could see was kites flying round and didn't get to sleep til about 3am and was up at 6am to do my washing before my 9am lecture! Absolutely crazy I know!

Anyhow, it was an absolutely fantastic day and I would recommend visiting Gigrin Farm to anyone as it is a magical place, especially when the kites decide to show themselves, and boy did they! You can now have your laughs at the Black Kite pictures too. There are decent pictures of other birds, honest.

The feeding station at the farm held: Chaffinch, Greenfinch, Goldfinch, Wren, Dunnock, Robin, Blackbird, Blue, Great and Coal Tit as well as a pair of Nuthatch. 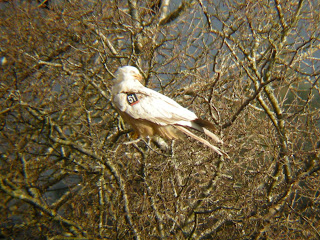 A leucistic Red Kite was also seen, very unusual to see. 2 Stock Dove also put in an appearance, putting my yearlist for 2010 on 147 and that is what it stands at now!
Posted by Chris Bridge at 12:45