I can imagine at this point, you are reading the title, thinking what on earth is this guy on about? Am I right.. Surfing to success, well.. I certainly did just that..

On the 8th March 2010, after leaving Ormskirk at 6am and arriving in Bangor at 11:30am, I had a text from my mate Alex who is also studying at Bangor.. The text read: ''Are you back in Bangor yet, I relocated the 3 Drake Surf scoters yesterday off Old colwyn from Rainbow bridge'' At this point I was green with jealousy, but not to worry.. After about, say... half an hour of reaching my room, I made a quick decision to go and chance it and have a look for them one more time! Seeing as though they were seen only yesterday, I saw no reason for them to disperse..
12:02 train from Bangor and off at Colwyn bay at 12:30. My phone then started to vibrate and it was Jason from back home! A great chap and cracking birder by the way, He had sent me a text saying that the birds had been seen just an hour ago... Shit!! Just under a 2 mile walk from the station to Rainbow bridge....so I tanked it down to the site..

The trains along the north wales coast are extremely handy when it comes to birding and a quick twitch.. Anyway, eventually arrived along the promenade by this old chap... He carried a scope and bins, at last, someone who might know if they were still there after an hour had passed..... A very brief: ''Are they still there'' had a reply to: ''Back of the flock between the 6th and 7th turbine from the left, good luck'' At this point knowing they were still out there, the conversation lasted a few seconds and within 5 mintues I was once again scanning the sea intently for these bastard scoters.. {language error} This guy had said there was another birder looking at them, but on arrival not a single bluddy sole in sight!! Guh!!!!
Settled into position and scanned the sea surrounding the 6th and 7th turbine very.....very...... carefully!! The next thing I knew... my heart jumped into my mouth, adrenalin shot round my body and my eyes adjusted as in the scope I could see 2 WHITE SCOTERS!!! Ahahahahaha. I couldn't believe my eyes!! There in the centre of my scope underneath the 6th turbine from the left were 2 Drake Surf scoters faffling around at the back of the scoter flock... Absolutely fantastic!! Taking into account that this was my 8th attempt in trying to see these birds and at last, the prayers and patience had paid off!! There you have it, the miracle!! I watched these birds for about an hour. Great views were had, sat on the sea, wing-flapping and a flight view of one of the birds revealed the 3rd bird slightly closer in, although still about 1 and half miles out to sea.. A large white patch on the back of the neck, white patch on the bill, as well as orange and a black spot could be picked out too.. Fantastic!! Absolutely fantastic!! 8th attempt and job done!!!!! Common scoters were evident in their thousands and a few Velvet scoters were also seen.. A Fulmar drifted by... 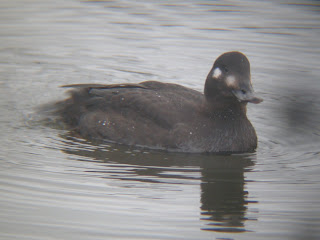 Sadly, the birds: 3 DRAKE SURF SCOTERS were 1.5 miles out to sea and no pictures were taken.. But still, a fantastic twitch and this time it paid off big style!!

I have to say a huge thankyou to Jason for his upto date texts on these birds over the last few weeks ... Cheers mate.