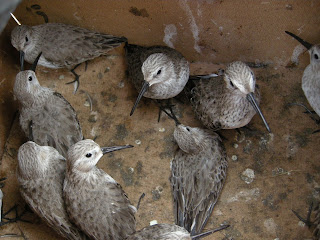 Since my post from last Thursday, each day from then on has been fully booked; either with mist-netting or a general busy itenary. Before I update on my recent ringing antics, our last SCAN weekend hasn't been mentioned yet so here goes..
As the winter of 2011 is coming to an end now, so too is our cannon-netting along the North Wales coast. So on Friday 18th February, myself, Kane, Zac and Hamza were raring to go.. A meal, a few pints and an early night was in order as we had to be up early the next morning.
The following morning and we were up at 5am and heading towards Llanfairfechan, where 3 cannon-nets were set, in which we were targeting a flock of Dunlin and Redshank. As usual, I was put on twinkling duties; Combined with Rachel and Richard, we managed to make a catch of 27 Redshank and 68 Dunlin shortly after. This was all thanks to Steve who was in constant contact with us with radios. 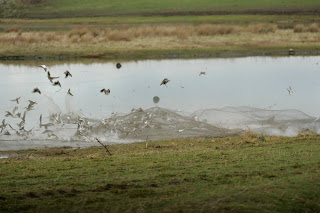 The fired cannon-net, which caught 27 Redshank and 68 Dunlin.

Soon after, a flock of 47 Redshank landed safely in the catching area and this soon brought our total for the morning to a nice sample of 74 Redshank and 68 Dunlin.
We had a large team throughout the weekend so this enabled us to extract the birds quickly and efficiently, ready for ringing and processing. 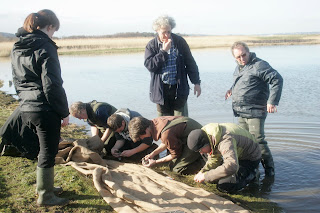 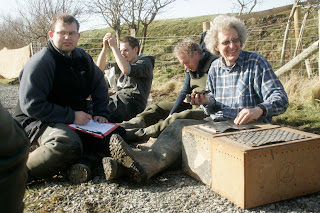 Once the birds have been ringed they are placed in safe keeping boxes ready to be released. 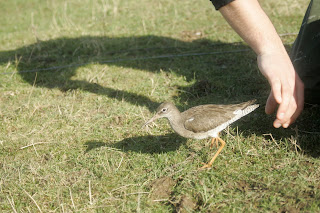 A few hours sleep and some much needed food inside us, we met again at Llanfairfechan Sewage works for some night time mist-netting. A total of 7 mist-nets were set in gorgeous surroundings and with clear, calm skies, we caught 28 Redshank, 2 Dunlin and superb Juvenile Greenshank! As i'm used to ringing until very late, I wasn't surprised when we finally finished at 00:00 that night! 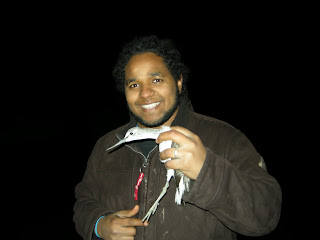 Hamza Yassin with the Juvenile Greenshank

The following morning we were up at 8am at Beaumaris, where we set 2 nets along the shingle beach. Unfortunately, the birds weren't playing ball during the morning and twinkling was hard work, so only 4 Ringed Plover and 1 Dunlin were caught.

At the end of the weekend, the ringing totals are as follows:- 102 Redshank, 71 Dunlin, 4 Ringed Plover and 1 Greenshank. 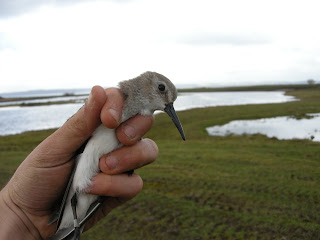 Huge thanks to Steve and Rachel and the rest of the team for a productive and successfull weekend's ringing! 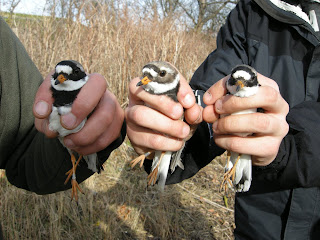