After having a very successful day's birding on Saturday 19th March, over on Anglesey, where I was looking at the gorgeous Bonaparte's gull at Traeth Lligwy. Thoughts were running through my head, that a day in bed may be on the cards, but in my case there is no such thing. Arriving back in Bangor late on Saturday afternoon, an hour or so later, I met Kane at the station as he was going to help out with the catch at Kinmel Bay on the Sunday morning. Getting a good night's sleep and we were up early on the Sunday morning and on the road to Kinmel Bay near Rhyl. On arrival, the gear was being unloaded from Steve's truck and down onto the beach. A quick set of 2 cannon-nets was the order of the day, so we could get off the beach and minimise the disturbance. 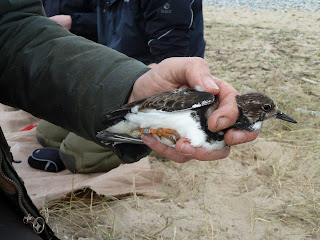 Above and Below - Photographed by Robin Sandham

This was going to be our last cannon-netting session this winter with SCAN, until September arrives. However, the main purpose of this session was to try and catch a specific Turnstone that had been seen at Kinmel Bay by a birder and after being photographed, revealed it to be from Norway. 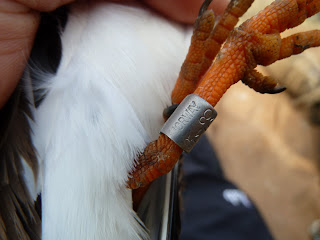 Also of similar importance was a large flock of about 200 Sanderling that were roosting on the shingle beach, adjacent to the river mouth. These little beauties are quite scarce in North wales, so it was good to catch a sample of these! 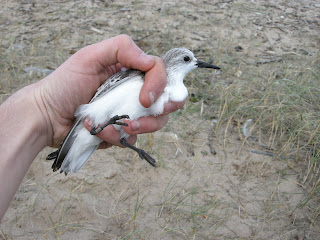 After twinkling the Sanderling and a flock of Turnstone into the catching area, the net was fired resulting in 114 birds being caught. A total of 61 Sanderling, 17 Dunlin and 36 Turnstone, with several re-traps, were soon extracted out of the net and put into keeping cages ready to be ringed and processed. 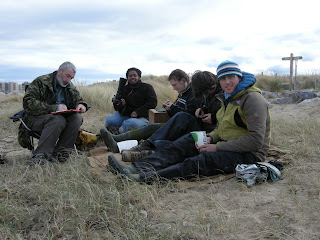 In order to deal with the catch efficiently, as usual a ringing and processing team are set up. During ringing and processing, it was clear that we had caught the Norwegian Turnstone, which was a great effort! I shall update soon when I receive the details. The Sanderling were also more than welcome as for many people, they aren't a bird that folk get to grips with regularly, so it was a good way to appreciate these northern gems in the hand and to perfect the ageing criteria for this species. A few hours later and the catch had been dealt with and all that was left was to do was to put the cannon net away and head for home for a shower and some food! 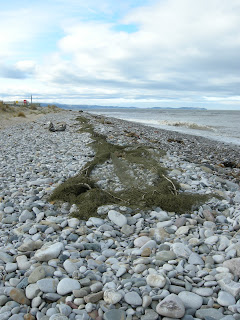 Dropping Kane off at Rhyl station, no sooner had we left him, I received a text saying that he had found some Collard Dove pulli! Great stuff!

Huge thanks to Steve and Rachel for yet another hugely successful catch and to all the twinklers for doing a grand job!